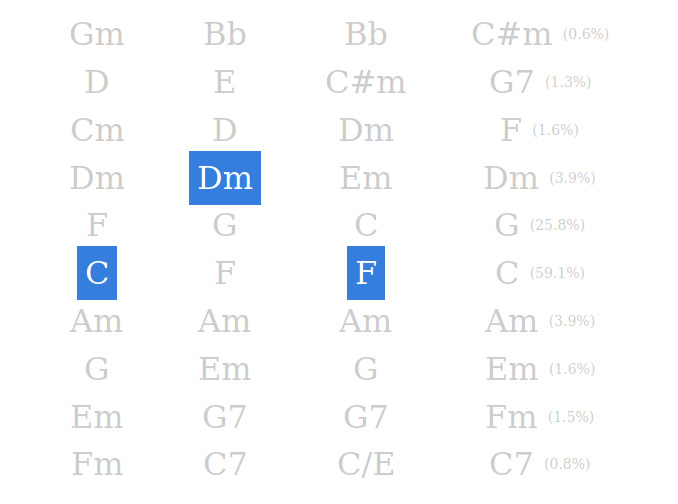 A website with the probability of every chord progression.

TLDR: the website that resulted from this is schollz.github.io/chords.

In 2009, the musical group “Axis of Awesome” demonstrated the ubiquity of the what they call the “Four Chord” song. They assert the that most popular songs of the last 40 years use a particular and popular progression of four chords: C-G-Am-F.

I wanted to see just how popular this particular progression is, so I asked the question: Are the four chords mentioned by the “Axis of Awesome” (C-G-Am-F) the most represented set of four chords?

Not only did I get the answer, but this question ended up resulting in a new web app to find chord progressions.

To gather song data to analyze, I first wrote a program that parsed guitar tabs and extracted chords. The data sample included more than one million songs from almost every genre (except for classical), including blues, jazz, pop, rock, country, folks, etc. I divided each song into sections (i.e. Verse, Chorus, Pre-chorus) and collected the names of chords contained in each section. To aid in comparison, I transposed all the chords in each section of each song so that they were in the same key, the key of C.

Once the data was ready, I found that I had compiled over two thousand different four-chord progressions.

After analyzing the one million plus songs, I had a list of the most common four-chord progressions. Guess which chord progress topped the list at the most probable?

Yes, Axis of Awesome was right! Their “Four Chord” song encompasses the most popular progression I found.

Interestingly, the next six most common sets of four-chord progressions are permutations on these specific four chords:

After that you start getting chord patterns that include new minor chords like Em and Dm:

It isn’t until about 60 chord progressions later that you get progressions that have any other chords, such as Bb. For example, these are the most popular two:

Those are just some of the most popular – there are many, many, more progressions.

Exploring progressions from millions of songs

It turns out that there is evidence that what Axis of Awesome claimed in 2009 is true: The most common four-chord progression seems to be C-G-Am-F. The other most common progressions are variations on those four chords, with addition of the other minors (Dm, and Em).

What about the other two thousand progressions? In order to explore them I built a chord-finding app based on the analysis of those million songs: https://schollz.github.io/chords/ Use it to help build your own progressions, and think about new music to create. Sometimes I use it when making my music I release.