Calculating how to cool coffee

Lets use physics to find the exact number of ice cubes to drop into a scalding hot cup of coffee or tea to make it the perfect temperature.

How many ice cubes do you need to quickly cool down a hot beverage to its perfect drinking temperature?

The specific heat of water, $c_{water}$ is 4.2 $J / g / °C$. The mass of a typical cup of coffee or tea, $m_{beverage}$ is typically around 480 grams. The change in temperature, $\Delta T_{beverage}$, is the change between the initial brewing temperature and the final drinking temperature.

Ice melts by absorbing heat, or energy. The heat absorbed by ice is given by

Once the ice changes into cold water, it will begin to warm up, by absorbing heat from the beverage. As before, the water will absorb according to the equation

When we reach equilibrium, it means that the total energy lost by the beverage equals the sum of the energy of the ice and the cold water (once the ice has transformed), $Q_{beverage}= Q_{ice-water} + Q_{ice}$. When we plug in the equations above we get

The only unknown is the mass of the ice, $m_{ice}$, which we can solve for to get

How many ice cubes do you need?

Coffee is initially at a temperature of 85°C. Tea has a similar high, undrinkable, temperature. The perfect drinking temperature is 50°C. Given a typical cup of tea is about 480 grams, you need about 4 regular sized ice cubes. (A regular ice cube from a ice tray is about 30 g).

How fast does an ice cube melt?

The area of the ice cube can be approximated by a cube of the same mass. That is,

The gradient of the temperature is between the surface of the ice and the rest of the hot water. Though this gradient can be pretty complicated (the heat diffusion occurs), we can approximate from the literature. Here is an infrared image of ice melting at room temperature1:

As you can see, the ice-air boundary is typically 0.002 meters, so we can approximate the ice water-boundary as $dx = 0.002$. The temperature difference is just the difference between the water and the ice, which is at 0, so $dT = T_{i}$.

How long does it take to melt?

which is measured in seconds.

I hooked up an Arduino to a DS18B20 temperature probe and measured the change in temperature over time of 480 grams of water, with (red line) and without (blue line) ice. 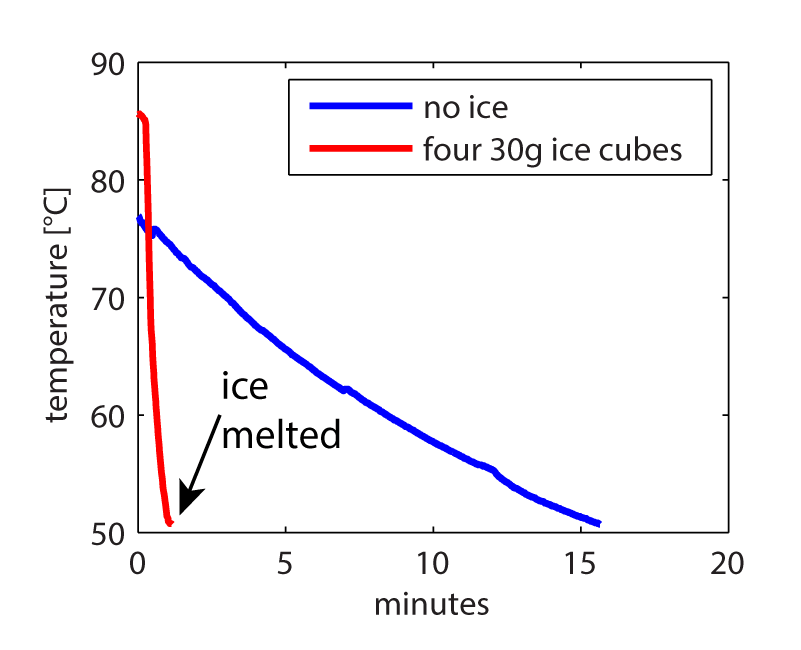 In comparison, the water without out that started at about 77°C, without ice, took over 15 minutes to get to the same temperature!

← Raspberry Pi as piano accompaniment.      A tool for web scraping.→